Best Of Marvel Legends 2017 – Best Wave of the year

2017 has been a mixed year for Marvel Legends. We have had the most waves we ever had for one year, as well as exclusives, but unfortunately 2 or more have been released around the same time with people only being able to afford a few figure per year. The character selection has been one of the best of the year with some of the long awaited character and versions we have asked for year. But unfortunately we had to by a repaint of the same figure for a number of waves or if we wanted to get a new character. The BAF have also been a mixed bag with some of the most detailed and most surprising figure to date with other being the most controversial we ever had. Hasbro experimented with some new stuff, some were successful and some weren’t but none the less they have proved that they listen to fans.

With all that being said I asked you to nominate your favorite figures, accessories, BAF and whole waves of the year. This began 2 weeks ago have I have gotten wholes of responses, (and some really questionable responses from a few people) and would like to thank all who took the time out to fill in the form.

But you’re not here for my thanks. You’re here for the results. We begin with what you people voted for the Best Wave of the year. This year alone we have had 7 waves this year. We began with a easy comic book wave with the Sandman wave but soon after we got our first MCU wave with the Titus wave which released a load of Cosmic characters as well as the Fan poll winner Angela. Around the same time we got our X-men wave of the year with the Warlock wave, which was a huge improvement over last year wave cause it included fan requested figures as well as character. Around the time GOTG Vol 2 came out so did a second wave of their figures, with the Mantis wave, which saw a new trend with half of the wave being MCU. Spider-man officially got his first MCU solo movie thus the next wave of Spider-man was base around that with the new Build a Vehicle Vulture wings which cause a bit of controversy. To fill up a bit of a dry spell before the Thor movie, Hasbro finally release a Netflix wave with the Man-Thing wave and have hinted their will be more. Finishing off the year, Thor:Ragnarok was released to huge acclaim so we got a Thor wave with the Gladiator Hulk wave.

But what wave was the best according to fans? For this I asked you to look at the character selection (what character were placed in the wave and whether they were worth buying) and the value for money (whether or not the wave was worth completing). Well before we get onto that let’s have a look at the runners-up with the third and second place winner.

Taking the third place winner is the first wave of the year and the most comic book full wave this year. This wave is packed with fan requested figures including a updated Black Suited Spider-man (the fourth place fan poll winner),Green Goblin and Shocker. We got the brand new characters Ms Marvel and the extremely surprising Jackel. Jackal is not only a new character he is also one of 3 brand new builds in this wave with himself, All-New, All-Different Spider-man 2099 and Spider-UK. When the sand-form Sandman figure was shown in the SDCC 2016 exclusive we predict that a regular costume release of him would get done eventually. Well the first wave of this year, we got it with one of the best sculpted figure to date with a number of interchangeable part. Truly a fantastic wave. 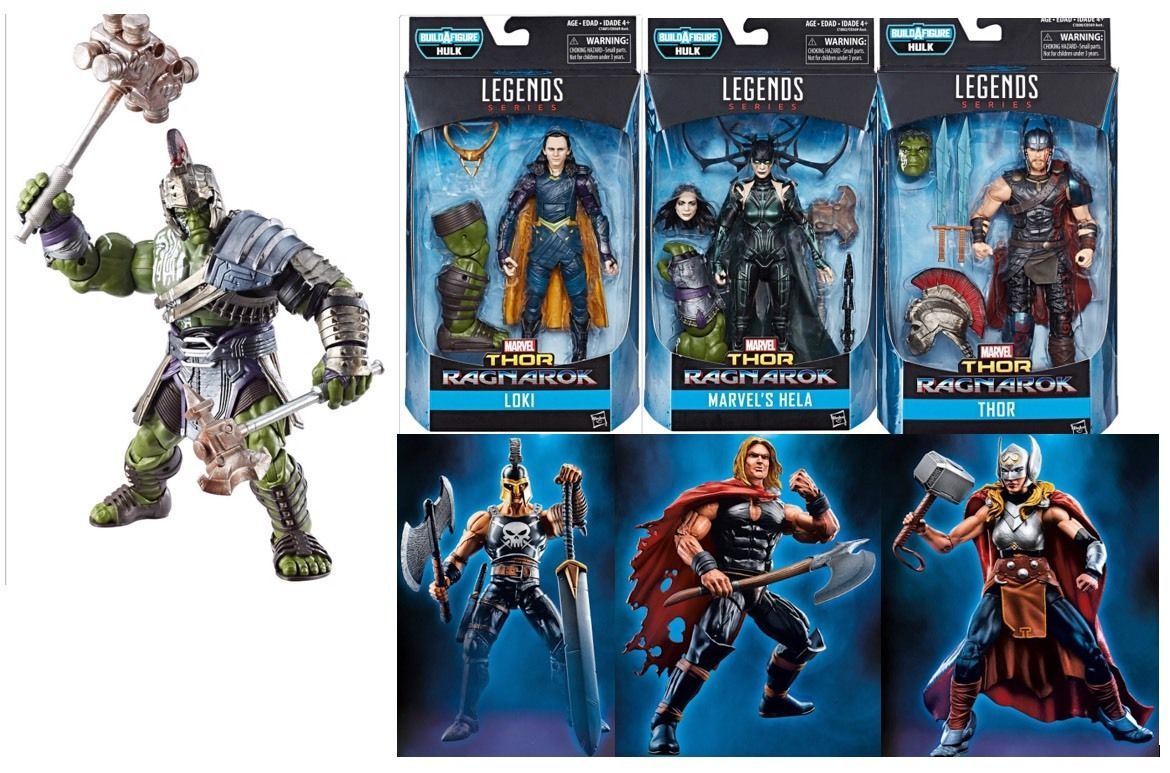 Finishing off the year and the seond place winner is the Gladiator Hulk wave. The Thor:Ragnarok movie was a fun movie, so it came as no surprise that Hasbro would release a wave for it (even though they didn’t do it for the other 2 movies). This wave was split between Comic and MCU figures. We were promised the Jane Foster Thor last year to be released this year. While the SDCC 2017 set did release here there, Hasbro knew the fans would want her released to retail. Odinson (or young Thor from the God Butcher arc) was not something most asked for but it did complete the 3 version of Thor from that storyline. Hasbro decided to re-release a long sought after figure with Ares with new improved legged and a much better paint. The MCU Thor and Loki finally got a general retail release while we also got the awesome new figure of Hela. The BAF of this wave was the Gladiator Hulk from the movie that almost everybody asked for, since they saw him in the trailers.

So. What wave did you guys vote for to be the best wave of the year? Well, for year we hadn’t had these guys in ML for but last year we gotten a wave that was so successful that it sold out almost everywhere. So Hasbro knew they had to release more, but involve on last years wave. The winner of 2017 Best Wave of the Year is……

What can I say about this wave that hasn’t already been said? Last year wave was one of the best wave ever from Hasbro, but this wave is 200% better then that. Not only did we get new characters but we got long requested version of characters we have asked for years for. Lady first and we got the 2 most requested female ever for a X-men line that being the Polaris and Disco Dazzler. Never in my whole life did I think we would be getting a Disco Dazzler with a Mic and roller skates. We also got the more obscure Shatterstar and Sunfire, both help nearly complete the version of the X-factor and X-men they were in respectively. We got a new and improved Colossus with frigging swappable bearded head. The Wolverine of the wave was a whole newly sculpted Old Man Logan (though most think he should have come with an alternate younger head). But the stand out figure of this wave is of course Cyclops. The Long request Jim Lee Cyclops is finally here and (with the exception of certain straps) he is perfect. Probably the biggest shock of the year last year was the reveal of the Warlock BAF and man is thing fantastic. The height and sculpt of this thing make buying the whole wave perfect and well worth the money.

Well that was the best wave of the year as voted by you. So you guys won’t think I am faking this result I will prove a link for the result page below. Please have a look at that and see the results yourself.

Next onto the Best Comic Book Male figure of the year………………………..when I gather all the data.