So picture this. It was Spidey’s first ever annual. Stan Lee and Steve Ditko wanted to to something big. Spidey had faced off with a number of villains, most of which were close to defeating him. So what would have happened if they teamed up? That was the idea for The Amazing Spider-Man Annual #1 (1964), when Doc Ock, after being defeated by Spidey a number of times, thought if he couldn’t defeat Spidey on his own maybe he could with help. So he sent out an invitation to a number of Spidey’s villains, including Green Goblin, Chameleon and even Dr. Doom, all who refused to come for one reason or the other. However, Sandman, Electro, Vulture, Kraven and Mysterio all attended the meeting and given that there was six of them including Ock, he decided to call themselves the Sinister Six. Thus began a trend of a number of villains teaming up to defeat Spider-man. While most usually follow the originally team line with a few different varieties, the name has been used by various villains over the year. It also has grown in number from seven to up to 66, though these ones are usually one offs. 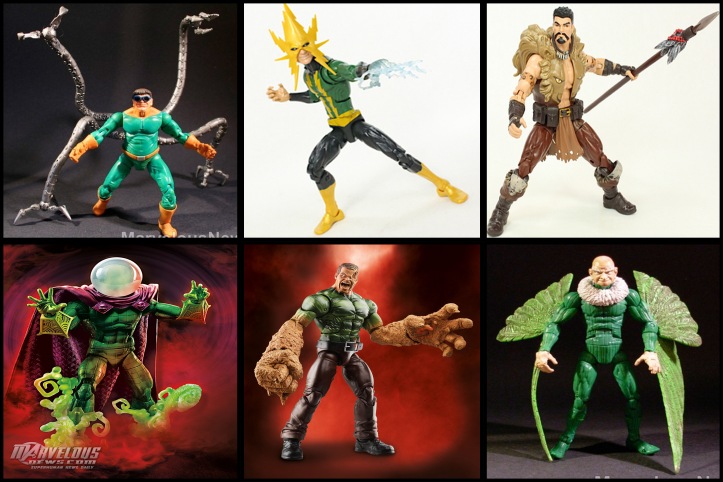 Brought together by Doc Ock, this team was brought together after all of them had been defeated by Spidey. Knowing that he couldn’t control the team, Doc Ock suggested that they attacked the hero individual, one after the other wearing him down to defeat him. They kidnapped Aunt May and Betty Brant in order to force him to fight. However, Spidey defeated all of them one by one, mocking them for not teaming up. We have gotten all of these character over the year and Hasbro is slowing remaking most of the TB versions, with Vulture and Doc Ock being the last to be remained.

Return of the Sinister Six 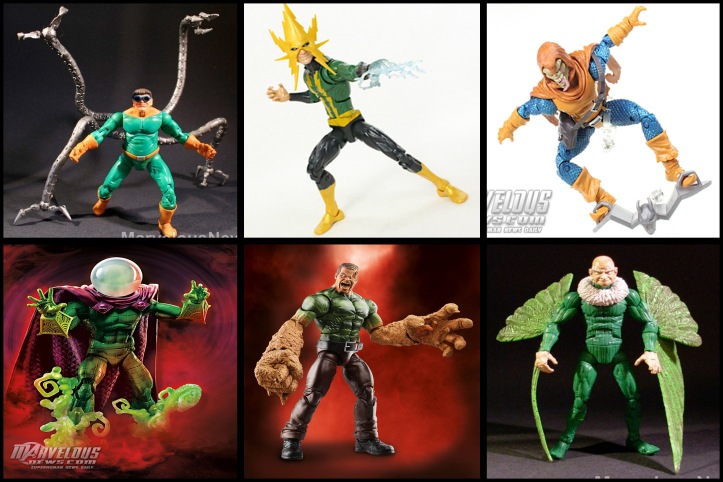 Doc Ock tried to recruit the original team in an effort to take over the world. However, after Kraven’s death after Kraven’s Last Hunt, He recruited Hobgoblin (a demonic possessed Jason Macendale). Also, since he had reformed after being separated from Hydro man, he blackmailed Sandman into working with him. However, this turned out to be this teams undoing as he went onto aid Spidey in defeating the team. Most of the original team is here so we have team, plus we also have the Hobgoblin, either the TB one or the swappable head of the Hasbro one.

Revenge of the Sinister Six 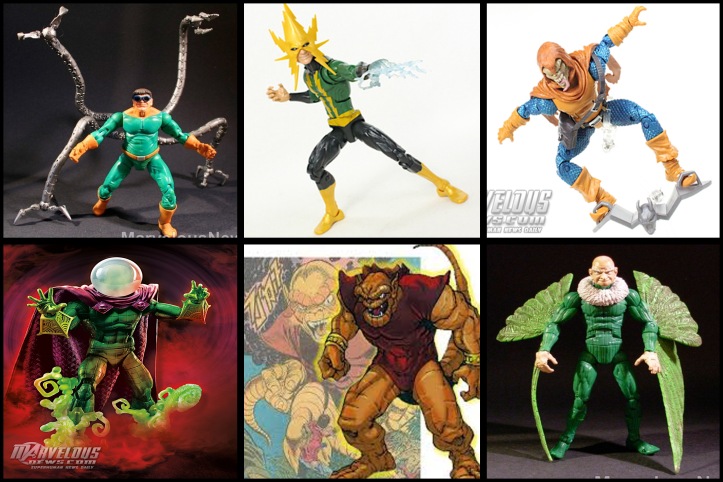 When Electro, Mysterio, Vulture and Hobgoblin wanted revenge against Doc Ock, they tricked Sandman into helping them by believing Ock had attacked his family, which they did themselves. Sandman agreed but was only working with Spidey as a spy. They attack Ock but were soundly defeated, with Sandman being turned into glass and Spidey being beaten near to death. The 4 agreed to work with Ock in exchange for aid in escaping the police. They began stealing advance weaponry as well as recruit the monster Gog. When they tried to conquer a Hydra Base, they were defeated by Spidey with a team of heroes, including the F4 and Hulk. The only character missing from the line of is Gog, who could be done on the Abomination mold with re-sculpted part but seems unlikely as he hasn’t been since.

In order to get revenge against Kaine for defeating him, Hobgoblin (still Macendale) recruit former members, Electro, Mysterio and Vulture, and recruit new member Shocker, Beetle (Abner Jenkins) and Scorpia, a female version of the Scorpion, to form the Sinister Seven, the first time the team used a larger number. They tracked down and attacked Kain but Spidey saved him and together they defeated the villains. The only one missing from this line up is Scorpia, but she is unlikely to be made as she is a little known character.

Seeking some payback against Doc Ock, Sandman, who had returned to being a villain and the second Mysterio (Daniel Berkhart, since Beck’s had killed himself during a fight with Daredevil), recruited Vulture, Electro and Kraven’s son, Alyohsa. The five being to attack Doc Ock and Spidey tried to stop him. Taken a chance, Venom attacked Spidey and was invited to join the team. However this proved to be mistake, as soon after they they attacked Ock, Venom began attacking the rest even taken a chump of Sandman, who soon could hold his form. They defeat Venom but fail in their mission. While most members of the time, except Venom and Sandman, wore different costumes, the likelihood of us getting those version is slim. And yes I know Berkhart wore his own version of Mysterio, this one work best for the character. The only one that would be new would be the Kraven as he was strikingly different from his dad.

After defeating Green Goblin, Spidey was finally able to capture him and send him to prison which outed Norman Osborn as Green Goblin, something that the public was unaware of. However, he had a plan in case this happens. Recruiting Mac Gargan and freeing him from the Scorpion suit, he had him kidnap Aunt May. Gargan blackmails Spidey into breaking Osborn out of jail, which he reluctantly agrees to do with the help of Black Cat. But Osborn being Osborn had also recruit 10 more member of Spidey’s rogue gallery and when they escaped from prison had them attack Spidey and Black Cat, including Gargan, who had now been bonded with the Venom symbiote. However, to both Osborn’s and Spidey’s surprises, a number of Spidey’s friends, lead by Cap, came to aid the wallcrawler. After Spidey defeated Green Goblin after he kidnapped MJ, he was able to rescue Aunt May who was buried in a graveyard. All they villains were sent to prison. We have gotten all of these character in some form or the other, including Marvel Knight’s Green Goblin and Mac Gargan’s Venom.

Sometime before or during the Civil War, Doc Ock had reformed the Sinister Six, recruit former members Shocker, Vulture and Lizard as well as new recruits Grim Reaper and Trapster. Not much is known about this team, except they were defeated by Cap’s anti-registration Secret Avengers and handed to SHIELD. The only one missing from this team is Trapster, who, despised what some people say, actually have a extremely high chance of being made as he is now one of the few Spidey villains left to be made.

After many year of fighting Spidey, Doc Ock was dying. So he decided to leave behind a legacy. He recruited a number of Spidey villains, but only let formed S6 members Chameleon, Electro, Mysterio and Sandman remain part of his team. He also got Rhino, who had just lost his wife, to become his most loyal member. He behind attacking various heroes including Iron man and the F4 (with Spidey as a member as the Future Foundation). This was to create a new power source to give to people but this turned out to be a weapon which would burn the Earth to hell. It took most of Spidey’s powers and friends to defeat this version including the “death” Silver Sable. Except for the version of Doc Ock, we have gotten all of these character in some form. 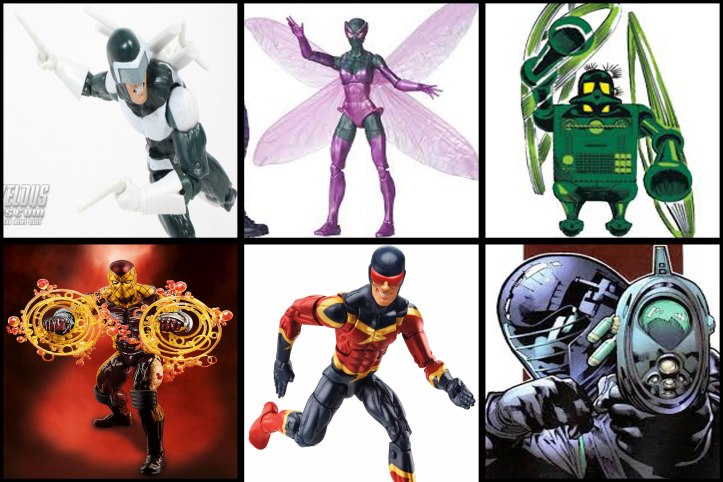 During the Superior Spider-man arc, a new team of Sinister Six were formed. With Boomerang leading he had Shocker, Speed Demon, the female Beetle, the Living Brain and Overdrive join him in attacking Horizon labs but were soundly defeated by Superior Spider-man (Doc Ock in Peter’s body). They escaped with Living Brain been capture and reprogrammed by Doc Ock. They remained a team and still called themselves the Sinister Six during the Superior Foes of Spider-man comic (read it. It’s great) despite them being only five members. However, infighting and the promise of a fortune for Silvermaine’s head, lead to this team breaking up. While Living Brain has very little chance of being made except for a pack in, Overdrive is almost guaranteed to be made. He is simply the AIM Soldier/ Ghost Rider body with a new head. He is being asked for in the Rider line of the series.

Doc Ock, in Peter’s body, has been tracking down and capturing former members of the Sinister Six, in order to force them to reform. However, he forced them to obey him by controlling their minds with a chip in their heads. He used them as a new hero team, the Superior Six. However, they broke free and of course attacked Ock, but since he was in Spidey’s body, the team still blames Spidey for this. We have all of these guys including Superior Spider-man. I know that Mysterio is a different person but this is a good stand in. Not really a proper version of the team but a horographic version of the team created by Mojo, who had kidnapped Spidey and his class of X-men students. They were only seen for a bit so the full roster was not revealed. The only one not made are Vermin, Ringer and Gibbon, all of who has a low chance of being made.

During a class outing in performing superhero duty with his X-men Students, the class happened upon a bank robbery by a new team of Sinister Six, who were soundly defeated by the Class, who joked that the name was being used by everyone these days. Out of the members shown only Swarm (a highly requested character) has a chance of being made. 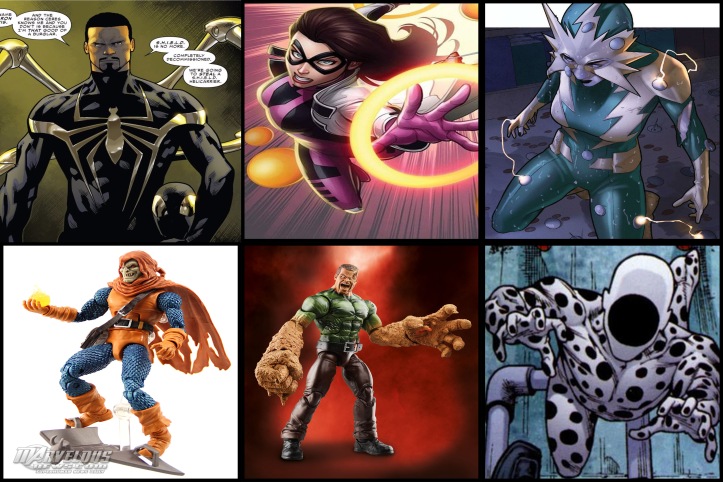 One of the latest version of the Sinister Six were recruited by Miles Morales’ uncle, who had acquired a version of the Iron Spider suit. He recruited Bombshell (Miles’ love interest), the female Electro, Hobgoblin, Sandman and Spot. He hire them to steal a decommissioned Helicarrier.